Van Gogh? Why, if you’re not an Art Lover… 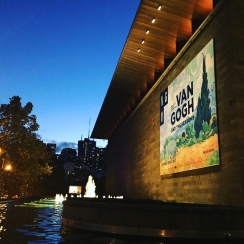 Recently I was fortunate enough to be in Melbourne for an amazing Travel Bootcamp (more on that later).

I connected with a couple of other delegates on the plane (that was a fateful trip -and more on that later, too!) and we connected really well.  They were heading to the opening of the Van Gogh Art Exhibition at the National Art Gallery in St Kilda Road in Melbourne. So I tagged along – and so glad I did!

What I Thought I Knew About Van Gogh

All I remembered about Van Gogh was from my school days (I won’t mention how many decades ago that was!) was that he was an eccentric artist that had cut his ear off, was poor and didn’t become famous until after he died.

Well, all of it was sort of true, but there was another side to Van Gogh that I hadn’t learnt about in school.

Before I tell you all about the real Van Gogh and his story, I will preclude it with the fact that this information is based on:

What I Know Now about Van Gogh and his Art

Very influential to Van Gogh was his brother, Theo.  It was hugely sad to hear that Van Gogh died in the arms of his brother two days after he shot himself. ?   When you watch and listen to the video, a lot of it refers to the conversation Vincent had with Theo, from his happy state of existence to his dark and desperate days.  It was a great start to the exhibition as it gave you a really nice overview.

After you watch the video, you wander through, getting the opportunity to spend time gazing at his art work.

I found the Japanese influence on Van Gogh extremely fascinating.

Apparently Van Gogh started his Japanese inspiration by collecting woodcuts in Antwerp. I believe he moved in with his brother, Theo and they built up a big collection of Japanese art. He really enjoyed the different spatial effects, strong colour, and the exotic and joyful feelings that these appeared to bring Vincent Van Gogh.

His work that was strongly influenced by the Japanese, is very different to his earlier and later work.

After the disappointment Vincent experienced when the Japanese influence didn’t go the way he thought it would, he appeared to begin his downward spiral into mental illness.

Apparently, while he was in hospital, being treated for his illness after cutting off his ear with a razor blade, he painted a painting a day. Apparently he was in there for a year, so that’s around 350 paintings just in that short time.

Many artists wouldn’t paint that many in their lifetime, let alone a year!

Van Gogh’s work is so diverse, that all I can offer you, is to experience it for yourself to get full appreciation of it.  I believe Art is very subjective and everyone has a different level of appreciation and expectations.

The exhibition itself could take you hours to get through, but I’d recommend at least an hour, if not a little longer.

The exhibition cost us $30 to purchase a ticket at the door, but you can book online (there will be a booking fee).  You may want to check about prices, because it was opening night for the exhibition, so they may vary or it may not cost at all.

Here are the links to the tours if you want to book a guided tour….

Enjoy it! Whether you are a true, with depth Art lover, or just an appreciative art spectator like myself, you will be sure to get something out of this exhibition if you go in with a blank slate. (so to speak…)

Got something to say about the exhibition? Add it below!